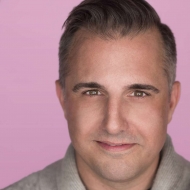 Kirk Novak was born upon a mountaintop in St. Louis, Missouri and then adopted by a poor family after being weaned off the bosom of a great and terrifying tentacled monster. He moved to Chicago and did some stuff at Second City, and then he moved to LA and did some stuff at UCB and also some stuff at indie theaters before finding a home doing stuff at The Ruby. Kirk fancies himself a writer, but he can act his way out of paper bag, and he will stand on the backline with your long-form improv team if there is nothing better to do. Kirk is handsome. Come on down and see him sometime.