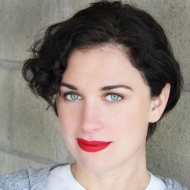 Steph Garcia is a writer and performer originally from the great state of New Jersey. She was a writer for the CBS Diversity Sketch Comedy Showcase, is part of The Hot Goss and a writer/performer on house sketch team The Money Pit. While on the East Coast, she wrote and performed on Magnet Theater’s sketch teams Dispacho, Colorado Dad, and Alchemy. She has been part of Chicago Improv Fest, LA Sketch Fest, Women in Comedy Festival, LA Web Fest, NYC Sketch Fest and the NY Television Festival. She also co-wrote and co-starred in the 2011 Best Film Winner at the NY 48 Hour Film Festival “Nanny Cam” and played a waitress on a soap opera a bunch of times. Also, she told me to tell you that she said hi.