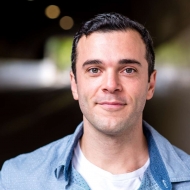 Nick Casalini performs stand up and improv pretty much every night. When he's not doing that, he's performing sketch comedy with his wife, Muriel Montgomery. They go by the name Ugly & Delicious and have also been known to look amazing on camera and improvise a two-person musical! Cool bonus: Nick gets to work as the MC of the world famous topless bar Sam's Hofbrau. He grew up in Seattle, lived in Chicago for five years, and now loves Los Angeles.