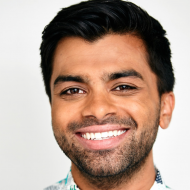 Born and raised in Cedar Rapids, Iowa, Neel Ghosh is a lost and confused comedian in Los Angeles. As a stand up comedian, Neel has been featured at the Laughing Skull Festival in Atlanta (2016 and 2017), Laughing Devil’s Cup in New York (2017) and featured for Michael Blaustein at the Comedy Lounge in Perth, AU (2017). Neel also performs regularly with his improv troupe, Spring Break ’08 in the LA improv scene. He is a trained improvisor and for the past 6 years has studied under Ptolemy Slocum, Will Hines, Casey Feigh, Matthew O’Brien, Monika Smith, Ashley Ward and many other amazing teachers. Neel has also been featured twice on Buzzfeed.com and in a sketch with Drake (!) for the NBA Awards (2016). You can catch Neel at his monthly show, Hotcakes, co-hosted by Michael Longfellow the second Friday of every month at Oeno Vino in Atwater Village or at the Moving Arts Theater every first Friday co-hosting with Spring Break ’08 at their show, Spring Break ’08 is Garbage.