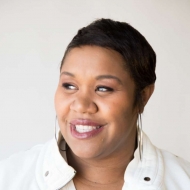 Indiana born stand-up comedian and actress, Luc Ashley, delivers quick-witted amusement and memorable physical comedy in all of her performances. Whether you see her as the host of television's new late-night comedy show, Laugh After Dark, or acting alongside her cast on the digital sketch comedy series, We The Funny. You are sure to experience Luc in true comedic form. With a raw and bold style of delivery, Luc unabashedly covers topics of all areas from race and relationships to parenthood.

As a black female comedy screenwriter and sketch comedy writer, she brings to every scene a relatable viewpoint that can be understood; creating both memorable and hilarious scenes and dialogue between all of the characters on set. With these skills she became a semifinalist for the 2017 WGA-East Made in NY Fellowship. Named by The Comedy Reporter, as "...one of Hollywood's awesomely funny new talents to watch". Luc brings hilarity in every scene she finds herself in.

Watch Luc perform LIVE every month at the Ruby LA, alongside her castmates of the Volcano house sketch comedy team!