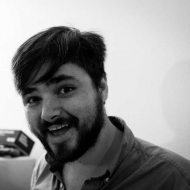 Jordan Pridgen is a filmmaker-comedian from Richmond, Virginia. When he's not pitching exact recreations of "Top Gun" scenes to his sketch group "The Money Pit," He acts as an executive producer and frequent director for the community production group Senior Ditch Day and performs monthly in "This American Lie: An Hour of Improvised NPR." He can also be seen on Twitch playing live tabletop RPGs weekly with "Saving Throw Show." Jordan has been performing sketch and improv since he was 15 years old, and struggles constantly with a serious addiction to being the center of attention. He is noticeably more amused than most people by trained animals of all sorts.