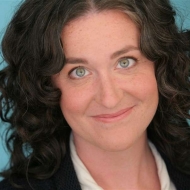 Jen is a co-founder and co-director of The Ruby LA. Jen has performed, written, directed, coached or taught sketch and improv comedy for 15 years. She's a member of sketch group Harvard Sailing Team with whom she develops and produces online content, live comedy, TV, film, and passion projects. Jen's written, acted in and directed branded content and other fun stuff for TV and the web, and in 2015, she developed a personal documentary project with Fusion & Big Beach TV about being a fat woman in America. She's also published a cluster of personal essays relating to feminism and body image. Jen is originally from Illinois, but lived in New York City for 15 years. She holds a BFA from NYU Tisch, Atlantic Theater Company Acting School, and is a graduate of the Northwestern University Cherubs program. She moved to LA in 2012 after working for several years as managing director of the Peoples Improv Theater in New York. Jen grew up in the suburbs of Chicago, and she her husband Kevin now live in Tarzana, CA, with their two cats and a dog, which is way too many pets.