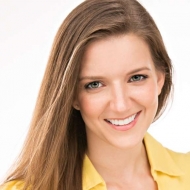 With a background in acting and musical theatre, Elizabeth came to improv and sketch comedy in 2011 after a series of performance art pieces that don't need to be mentioned but critics raved were "a thing I guess".
She started performing at stages around Austin, TX before moving to Los Angeles in 2014 to try her luck at traffic. She has written for the Youtube series "Princess Rap Battle" and can be seen riding the subway, eating candy from bulk bins at Whole Foods, and performing stand-up, sketch, & improv on stages around town and in her home in front of her audience of dog.
She loves talking about old movies and musicals so be sure to ask her about sports games.

The Ruby's Sketch Team (who happen to all be women)