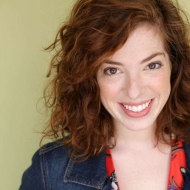 Brigid is an LA-based, Chicago-bred, actor, writer, musician and comedian. She​ ​has appeared in sketches and videos on BuzzFeed, Funny or Die, Bustle, Huffington Post Comedy, the iO Comedy Network — and has been featured in national and regional commercials, including spots for Honda and Google.​ Brigid's stage credits include the Second City, Upright Citizens Brigade Theater, iO​ ​(formerly Improv Olympic), Annoyance Theater, Upstairs Gallery, and the Playground Theatre. She has trained at Second City Chicago, Upright Citizens Brigade LA, iO Chicago, The Annoyance, and The Groundlings.​

The 2017 short film ​Over and Out, which she wrote, produced and stars in just began its festival run, and has already found it​s​ way into round two of the SAG-AFTRA LA Short Film ​showcase.

Brigid is​ ​excited to be part of LA's newest hot spot for sketch comedy, The Ruby, and cannot wait for you to try to figure out which sketch is hers amidst the scores of hits bound for her team, SPLASH.​ ​When not at The Ruby, you can find Brigid putting up characters at The Improv Space,​ Little Joy,​ ​The Clubhouse, ​and in the monthly U​pright ​C​itizens ​B​rigade​ show The XX Factor.