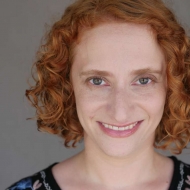 Becky is a performer, writer, and thrilled to be a part of the Ruby LA! She’s an alum of UCB’s Harold Night and Maude Night and has performed improv, sketch and even a few solo shows around LA. As an actor, she’s appeared on Broad City, Transparent, and played a fake activist on Jimmy Kimmel Live. She currently writes on the children’s animated series, Talking Tom and Friends. She also hosts a podcast called Too Stupid to Live, which reviews romance novels $5 and under.

No teams entered yet.