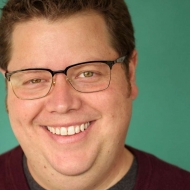 Andy is a proud member of Rosa. He began his improv journey 20 years ago at Beloit College. Since then he has studied and performed at iO Chicago, the Second City, and was a touring member with Mission IMPROVable. Andy has also appeared in numerous filmed productions including: VEEP, Chicago Fire, Empire, Patriot, the Onion Web Series: Tough Season, and Distance. He also plays the voice of Gordon, on Kobe Bryant’s kid podcast, The Punies.