Tess Paras shares her thoughts on diversity, equity, and inclusivity (DE&I for all the newbies) in the entertainment industry in this short little interview! 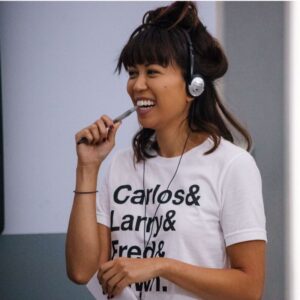 How have you seen the industry change in the past few years, since it seems that people have become more aware of inclusive casting and diverse stories? Have studios really been working towards this goal, or is it all lip service?

The industry has changed for sure! There’s still a lot of work to do, but every year there are more and more opportunities for inclusion – whether that means a call to action to diversify writers’ rooms or have more inclusive casts that reflect the world around us. We owe a lot to recent projects like Black Panther, Get Out, and Crazy Rich Asians because they were phenomenal AND made a lot of money. That’s what creates attention at studios. However, at the same time, Hollywood doesn’t take risks on a lot of new faces — those projects came from creators who already had proven track record of incredible work – Ryan Coogler, Jordan Peele, Jon M. Chu. Even with CRA, it was a best-selling novel first, so now a lot of studios are looking at Asian authors and novelists to work off of that intellectual property. Furthermore, the Asian-American shows that are all the rage this pilot season are centered on the Chinese American experience because of the impact of CRA. It’s not all lip-service, but Hollywood still does a lot to stay within the framework of what’s familiar, whether it be a story or the people attached to it.

Where does the industry still need improvement?

On the buying side and on the creative leadership side. Folks who are buying scripts and developing at networks and studios are still majority caucasian. From my experience pitching, I’m constantly explaining what being a Filipino American is (Asian face + Spanish last name = mini colonial history lesson) when I share my story. That immediately makes me feel like it’s not a level playing field at all – I’m still “othered” when I walk into those rooms and have to work even harder to feel understood and equal. I want there to be more diverse buyers! Same thing with creative leadership – your Executive Producers, your Showrunners, your Directors — there need to be more diverse people in those positions, too! That’s when we’ll get better, more nuanced worlds, characters, and stories and less tokenism.

How are you celebrating Asian / Pacific American Heritage month?

So far, APAHM has been dope! I just had the world premiere of the short film I wrote and directed, The Patients, at the Los Angeles Asian Pacific Film Festival. I also spoke on a panel at their creative conference. I’ve been to this festival for years as an audience member and a student, taking notes in the back and aspiring to make my way creatively. So, to come back as a writer/director and actress has been full circle. I really love being a part of the filmmaking community and being able to give back! Plus, my mom said she was proud of me. And, if you’re the daughter of Asian immigrants, well, you know that’s like, hella rare.