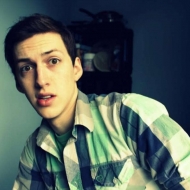 Ryan Pigg got his start in Chicago at Frequency TV from his sketch comedy series on YouTube. He was hired as a writer and became a showrunner for a comedic web series he created for Frequency.
After moving to Los Angeles Ryan co-created and began co-hosting 'Historical Roast', featuring comedians roasting one another as historical figures, such as Lincoln, The Beatles, and even Hitler. After more than 50 roasts it was picked up by Netflix and he became Co-Executive Producer on the series, hosted by Jeff Ross. He's also been a writer and cast member on the sketch comedy team, 'The Burbs' for over three years.