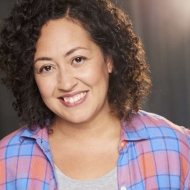 Muriel Montgomery is a Los Angeles based actor, writer, podcaster and improviser. Muriel has been performing improv and sketch for over 13 years in Seattle (Unexpected Productions), Chicago (iO Chicago) and Los Angeles (UCBLA, The Ruby LA). After touring her successful 2-person live sketch show, Ugly and Delicious, Muriel co-wrote and starred in the award-winning web series Fam Club (Best web series - Pan African Film Festival). She currently is a company member and producer of the monthly scripted UCBLA show, Quick and Funny Musicals, as well as an ensemble member of The Ruby LA improv house team, KAREN. Muriel also co-produces and co-stars in the podcasts Hella in Your Thirties and Muriel’s Murders with her husband Nick. Muriel has been teaching and coaching improv for 8 years and has been happily on the teaching staff for The Ruby LA since 2019.