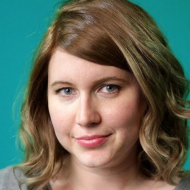 Meg Sinick is a mild-mannered actuary by day and enjoys a secret double life as an improv and sketch comedian. She started performing improv in 2014 in Boston at ImprovBoston and the Riot Theater, on various teams including Improv Jones Boston and Magic: The Gathering: The Show. She moved to Los Angeles to pursue her dream of continuing to be an actuary, but in a warmer climate. She trained at iOWest, Second City Hollywood, and The Ruby and was a member of Second City’s improv hip hop ensemble, Ghost Face Kittens. She is very excited to be performing at the Ruby with Gloria!