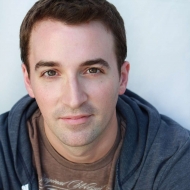 Born and raised in Chicago, Chris McGowan has been calling LA home for over 10 years now. Formerly on the team "Big Boss," he is now proud to be part of "Branzino." A graduate of the Nerdist Improv School, as well the iO West and Second City Hollywood programs, he can also be seen on the Second City team "SNACKS" as well as the indie team "Honeymoon." He's written and performed a few solo shows and is at work on a big writing project. He's also a big Doctor Who fan.