THIS CLASS IS SOLD OUT. SIGN UP FOR THE WAITLIST HERE. 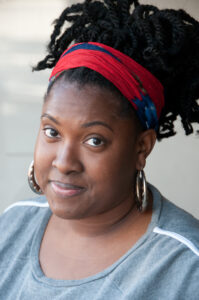 Charity L. Miller is a multiple Emmy-nominated writer/director/producer of crap no one really cares about. Originally from everywhere-the-US-Army-stationed-her-parents, she now calls LA home. She’s improvised in Netflix’s Between Two Ferns the Movie (only one line). Sold shows to Disney (the Mickey Mouse one). And developed original programming for Imagine Entertainment (you know, like Ron Howard and Brian Grazer). She’s a working kids’ and family television writer (Raven’s Home, Family Reunion, Made by Maddie, Bird and Squirrel, etc.). She also gets paid to write for awards shows (with like, celebrities and stuff). Theatre-wise, Charity’s written several critically-lauded sketch reviews (UCB’s Jesus Was Ashy, UCB Maude Team: The New Deal, iO West’s Period Panties, and Second City Hollywood’s THIS IS NOT A TAN!); but also wrote, produced, and/or directed other less-lauded stuff (like UCB’s Token, iO West’s Jet Jaguar, and 487 Second City Hollywood Premium Shows). In addition to all that other mess, she’s directed Maude Night (UCB’s house sketch teams) and directed and written for Legitimate Goddamn Theatre, and tons of other UCB main-stage shows. Her comedy training (Upright Citizens Brigade, Nerdist School, iO West, Second City Hollywood), master’s degree (FSU, KSU), and Shea-buttered Neo-soul leanings (Women’s Center for Creative Work) directly clash with her family’s southern roots, advanced knowledge of hashtags, and fixation on baby animals. She’s taught hundreds of workshops (Cartoon Network, Black Women Animate, etc.) and college and university-level writing classes (as a thankless adjunct professor). She’s been a finalist/official selection/winner of stand-up competitions (California’s Funniest Female), writing contests (like all of them), and short film competitions (SXSW). She was one of the surviving writers in the 2016 CBS Diversity Showcase (back when it was evil). In addition to sleeping, she co-hosts the dope AF stand-up show: Headscarves and Du-rags (HD Comedy) at The Ruby LA every month and performs with UCB improv troupe The Cabal every week.

This class meets once and does not have a class show.

As the lines between television comedy and drama increasingly become blurred to accommodate the evolving tastes of sophisticated audiences, a new television genre: the “dramedy” has emerged. Popular shows such as ATLANTA, THE GREAT, FLEABAG, BACK TO LIFE, RESERVATION DOGS, CLAWS, and THE SEX LIVES OF COLLEGE GIRLS are rewriting the stagnant rules of television. Thanks to this new breed of TV and its unique formatting and quirks… dramedy has taken off and set itself apart from its single-genre contemporaries.

In this one-day writing workshop, you will learn the intricacies of this new TV hybrid and work to formulate a plan for the first draft of an original half-hour dramedy pilot. The class will use traditional elements of half-hour comedy (characterization, physicality, limited locations) along with dramatic elements of a stereotypical hour-long drama (emotional arcs, serialized storytelling, and dark themes) to craft students’ writing.

This event is fully booked.